Two visits to Kent this week

On Tuesday morning, I set out with Dante on my first coastal mission of the autumn. There wasn't really a specific weather related reason why Tuesday was the day, more to do with other commitments for the rest of the week. But it turned out pleasantly satisfying in a low key kind of way. After all it's still August so it's the warm up before the big autumn event kicks off. We headed to the White Cliffs area, parked in the NT car park and then walked east towards Langdon Hole and Fan Bay. It was a nice, foggy morning which felt later in the autumn than it actually was. To cut it short though, the birds were decent enough with highlights being a Black Redstart in the bottom bushes at Langdon Hole and a Pied Flycatcher briefly in the gully at Fan Bay. Add to that a Tree Pipit, a Wheatear, 40 Willow Warblers, 15 Lesser Whitethroats and a couple of Reed Warblers, for a landlocked London birder it wasn't too shabby.
However, by 11.30am the fog had started to lift and the birding quietened down in the Dover area. And so with that, we headed off back up the A2 and felt it was rude not to make the now annual pilgrimage to see the returning Bonaparte's Gull at Oare Marshes. On arrival, we checked East Flood where highlights were adult Curlew Sandpiper and Spotted Redshank among the copious amounts of Black-tailed Godwits. And then we headed to the Swale where on the first scan of the mud, the Bonaparte's Gull was found - much to the relief of some old boy who'd been looking since 9am! I headed out to it, chucking bread in the process - but, as I've found on my travels, Bonaparte's don't seem too fond of bread and this bird was no exception. It did walk a bit closer to investigate the excitement though: -
Once this was done, we headed back to Rotherhithe where there was a distant juvenile Mediterranean Gull and four Yellow-legged Gulls on the mud by the Hilton Hotel. There was also a dog briefly, but my aggressive stance towards the owner meant that it (and the owner) weren't there for long. I think those who have been with me in the past, be it Rotherhithe or Dungeness, have felt uncomfortable about how I deal with dog walkers but it does seem to work. If you don't shout or throw your wait around, then they just continue to do as they please. My hobby doesn't infringe on them, so why should their mongrels disturb my gulls!

Anyway, the next day (Wednesday) I'd calmed down and after going into school to get the GCSE results (a day earlier than the kids as always), I woke the lad up from his slumber and we headed off back down to Kent. This time, to see a juvenile American Black Tern at Dungeness that had been nicely found by Stephen M the evening before. After a few minutes wait, the bird showed up hawking over the water from Makepiece Hide, along with 20+ Black Terns (the largest number of these I'd seen for a good while). 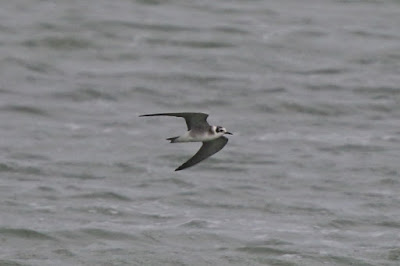 It was a thoroughly satisfying bird because despite being generally distant, it was nice to have a bit of a memory jog as I'd seen only two previously, the first for Britain in Somerset in October 1999 and then one in Oxfordshire in August 2009. This bird was obviously smaller than the Black Terns, something I'd not remembered from previous experiences. The lack of contrast/greyness on the underwing was great too as well as the obvious grey flanks. There were a couple of Great White Egrets on the Burrowes Pit too, that a decade ago would have deserved more than just the cursory glance I gave them. And we rounded the trip out with a couple of loaves at the fishing boats - with this brute of a juvenile Yellow-legged Gull being the highlight: -
And that was that. Bring on the autumn.
Posted by RB at 19:28