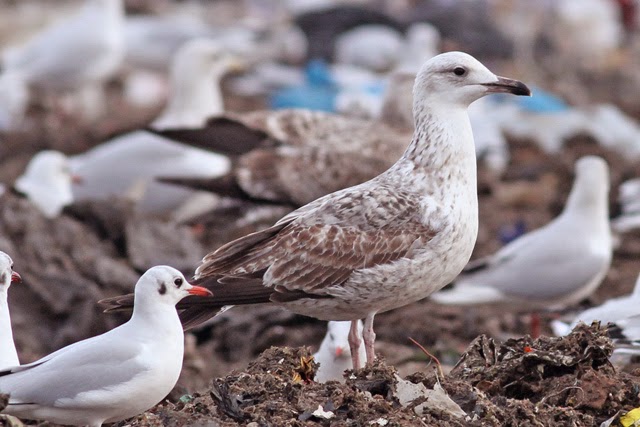 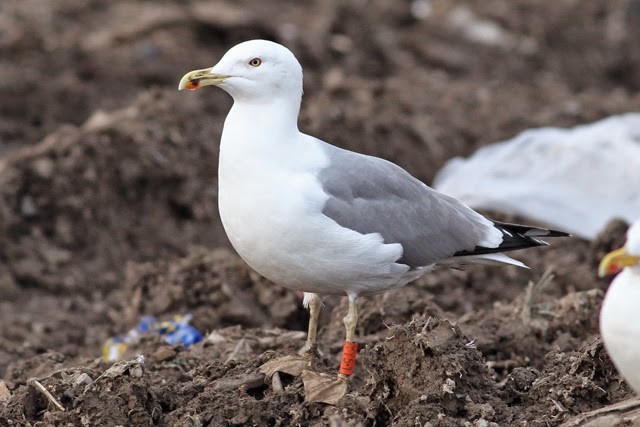 This is the third week in a row I've visited the tip. And for the third week, the day ended with a flat tyre. Obviously tips are hazardous places with bits of metal and the like sticking out of the ground, but given the last couple of years there have only been a three or so punctures in total, this is real bad luck. And before having to leave prematurely, there were actually lots of gulls but unlike last week, the Caspian Gulls didn't really perform. In fact, there was just one first-winter bird today that disappeared behind one of the compactors and couldn't be relocated. Add to that a 2nd-winter Yellow-legged Gull and half a dozen locally ringed gulls, and that was my lot.

A handful of Casps to kick off the season

It seems that with all those Desert Wheatears last weekend, the winter has now typically set in. And, to be honest, it couldn't come soon enough. The autumn promised a lot with the weather systems in early October, though actually delivered very little except for my bi-annual Eastern Crowned Warbler dip. Gulls are the winter theme, as here in a people saturated southeast England, there isn't really much else to look at that really interests me. I'm fine with that though, as today exemplified. 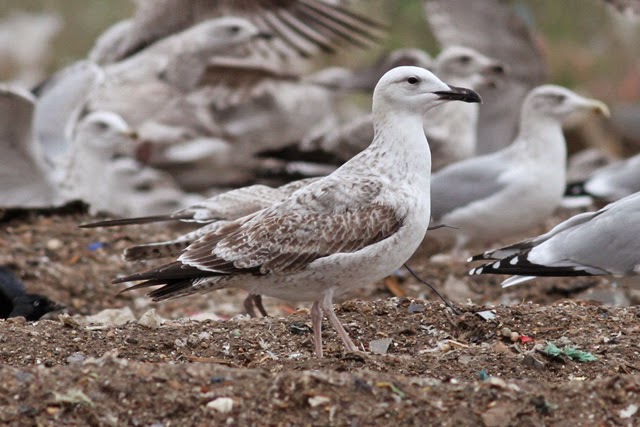 A dreary, relatively mild day on the tip kicked off the season. The ringers were about too, and managed a decent catch of birds. The cannon netting didn't really disrupt the flow of the birds too much today, and with a load of dust carts coming in and out, there was plenty of food for the gulls. And loads of gulls too - more than what we were getting on average last winter. So, with cachinnans withdrawal symptoms, today I was back on it with a total of five Caspian Gulls seen - three first-winters, a third-winter and an adult-type. There were also a similar number of Yellow-legged Gulls knocking about, as well as a Med Gull and a couple of leucistic Herring Gulls. Gull rings were limited to just half a dozen locally ringed birds, but it's actually quite tricky to scan for birds and look at their legs!

Already looking forward to next weekend, and the run up to Christmas. At least it's a good excuse not to be able to go shopping on a Saturday.

Another day in Kent...

It's going to be a long old winter with just gulling to keep me going. So with a 1st-winter Desert Wheatear just a short drive out of London on the Kent coast at Reculver, it was rude not to pay it a visit. Josh kindly gave me a lift for what is likely to be my passerine highlight of the autumn, trumping the current contender of Yellow-browed Warbler.
It seems to be the 2014 fashion of being rather harsh on these desert dwelling critters. What with all the long lenses shoved up their rear ends, there has inevitably been a little bit of overkill - the amount of photos on the web between this bird, and the other two (in Norfolk and Suffolk), is a little extreme. But, that said, chats are still pretty good looking, characterful birds that always have pleased the crowd. The way this bird sallied from its rocks was nice to see.
The Desert Wheatears we get here in late autumn - the harbingers of winter - are probably eastern birds from Kazakhstan/Central Asia (races atrogularis/deserti) as opposed to North Africa (race homochroa). And to add a bit of nostalgia to the occasion, it's 20 years since I first saw this species in Britain - on a dull November day, with my Dad, on wasteground by the side of a Morrison's in Blackpool.
Posted by RB at 21:43 1 comment:

Back to the gulls thankfully

It's been a week now since I returned from the Azores. And after enduring a 30 hour journey back from Corvo to London (5 flights and 6 airports later!), I got involved in my usual post October Azorean trip activity - driving overnight to the northeast of England to dip another Eastern Crowned Warbler. At least the gulls still love me though...
And so, with a week done at school already, it was time to start hitting that favourite activity of mine that'll see me through from now til April. Gulling. It didn't start too well, as Steve and I met up for a tip visit but with a flat tyre on the vehicle and nobody about at the workshop to fix it, we headed off. I went to Dungeness, after briefly toying with the idea of seeing a nice cute Desert Wheatear. Down at a blustery Dunge, the highlights were two 1st-winter Yellow-legged Gulls, three ringed birds (including two Scandinavian Great Black-backed Gulls), lots of Kittiwakes moving west offshore and a solitary Great White Egret drive by on the ARC Pit.﻿﻿