I came out of Western Palearctic retirement a couple of weekends ago. There are a few birds that, despite never likely to occur in Britain/Ireland, still hold that bit of mystique due to their WP status. And a Dwarf Bittern that had recently been found on Fuerteventura was a classic example of that type of bird. Not exactly easy to see in their native sub-Saharan range, and an extreme vagrant to the WP with no twitchable birds over the past decade either. With it lingering too, and showing nicely, that was all the more reason to have a weekend on a sun-soaked island.

Arriving late morning on the Saturday, I was kindly picked up by Josh J and Ed S who'd arrived on the island the day before. A quick drive took us to Barranco de Rio Cabras where, parking in the middle of the desert, we quickly walked a couple of hundred yards to the barranco (canyon/wadi) where there the bird had been. It was a bit of a surprise to find so much water and vegetation down in the bottom, but as the other guys had seen the bittern the day before, it didn't take long to locate: - 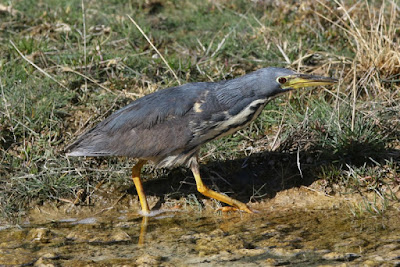 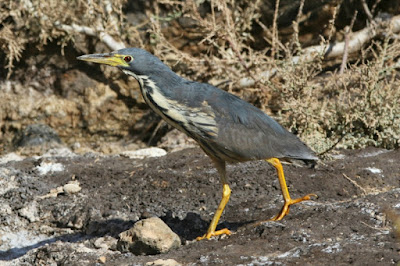 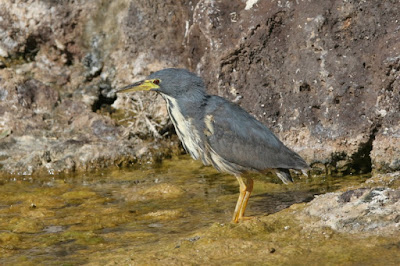 It was a really showy bird, so long as you waited for it to feed along the small stream - any sudden movement, and it was gone. A proper delight to see, more reminiscent of a Striated/Green Heron rather than a bittern in terms of how it was feeding. The place was also full of other decent species with a couple of pairs of Fuerteventura Chats, two White Storks, Egyptian Vultures, Berthelot's Pipits and African Blue Tits all seen in the barranco on the couple of visits we made there.
It's rude on any trip to Fuerteventura to not go and see its resident specialities, so on the Sunday morning the Tindaya Plains delivered with five Houbara Bustards, including a showy bird just as we were heading off: - 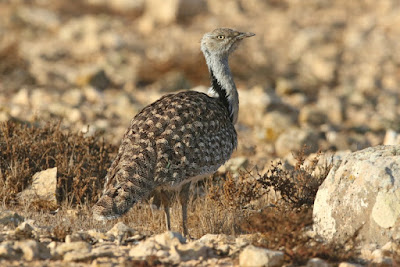 This was my third visit to the island (following an Allen's Gallinule twitch in December 2011 and a week there back in 2003), and one thing that was really obvious was the spread of Ruddy Shelducks like wildfire. There were nearly a couple of hundred of them at the traditional site of Embalse de los Molinos, while even in Caleta de Fuste - on the golf course there - there must have been in excess of fifty of the beasts.
Unfortunately, on the way home our flight back to Stansted was cancelled due to snow there. This meant we had a bonus morning at the expense of Jet2, and while Josh and Ed scoffed their faces on rancid food, Alan L and I had a quick look around the golf course. The highlight being this Golden Plover: -
And so that was that, another decent weekend break filled with nice memories, good tapas and pleasant company. Just what you want from WP twitches these days.
Posted by RB at 22:47 No comments:

I finished for the Christmas holidays on Wednesday, so typically I've had time to do a bit of local stuff while fretting over braving the shops and completing the gulls section for the 2016 London Bird Report. It almost feels like it'd be less work going back to work! Although you don't see things like this at work: -
Jack Snipe is a bird I rarely see these days, so I was really happy to have a look at this fine chap as it bounced about on the small pond in Greenwich Ecology Park. In fact, it felt like I was back on Scilly staring at them on Lower Moors or Porthellick instead of having it with a backdrop of Canary Wharf. A thoroughly enjoyable, cryptically plumaged bird.

With low tides mid morning, I got the loaves out in the hope there'd be something about. Today and yesterday I visited Thames Barrier Park and it was really barren, which was a great shame considering how decent this stretch of the Thames was last winter. I'm going to put it down to the mild weather and continual west/southwest winds which just doesn't bring the roaming gulls into the big city! Nevertheless, there were four Yellow-legged Gulls there today (an adult and three 1st-winters) and three yesterday (an adult and two first-winters) but not the hoped for Caspian Gull.
Meanwhile in Rotherhithe yesterday, on Greenland Dock I managed my first ever Shoveler for the site - a female along with 49 Tufted Ducks - that presumably had decided to wander from nearby Southwark Park (where the species is regular).
Posted by RB at 18:10 No comments: 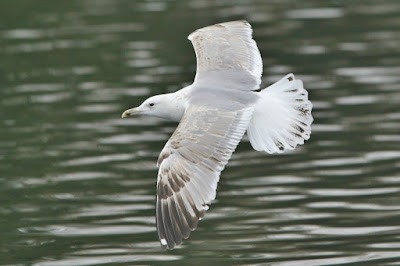 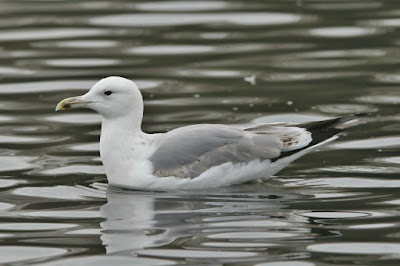 And that was that. Another weekend, a load of gulls. All that a guy needs to keep him away from anything to do with Christmas, thankfully.
Posted by RB at 23:47 No comments:

A handful (and a half) Casps at Dunge

A quick trip down to Dungeness today with Dante and Josh was nice and pleasant, particularly in the midwinter sunshine. We got down there mid-morning and headed straight to the fish hut and fishing boat area, where we almost found our first Caspian Gull of the day... or at least a gull that seemed to have Caspian Gull genes in it. 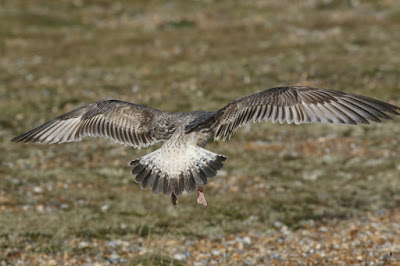 However, Martin C contacted me from just a couple of hundred metres away with the real deal. A really good looking 1st-winter Caspian Gull on the beach by the fishing boats: - 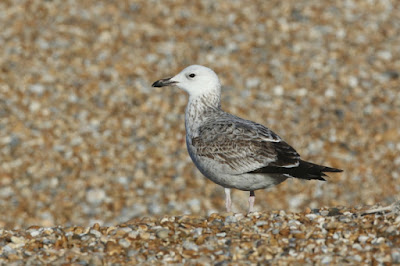 There was a nice 1st-winter Norwegian Great Black-backed Gull as well, which had been ringed at Langholmen, Rogaland as a chick on 28th June 2017 and was first seen at Dungeness on 11th November 2017.
We headed off to Lade Pits for a bit of general birding, where a female Long-tailed Duck and a Slavonian Grebe were the highlights. Once finished there, we headed back towards Lydd where there were a decent total of 16 Bewick's Swans (including 4 juveniles) in fields at Cockles Bridge as well as a male Merlin over there. A quick check of the RSPB Reserve produced a good haul of Caspian Gulls - all from either the Makepeace Hide or Firth Hide, and all (an adult, two third-winters and a scabby looking, German-style 1st-winter) typically distant.

And it was then back to the fishing boats for the afternoon, where we predictably met Mick and Richard. Surprisingly things here were quiet, bar a 2nd-winter Yellow-legged Gull and a bread investigating Kittiwake: -
So it was back to the reserve for the last hour or so of light, where the classy 1st-winter Caspian Gull from the fishing boats earlier this morning had relocated. And that was pretty much the last bit of action as the light failed, and the clouds started to gather. Not a bad day with a handful of Caspian Gulls plus a bit of back up more generally.
Posted by RB at 23:21 No comments:

It was going to be a normal day today, doing the gulls. That is until early evening yesterday, when news started to surface about a White-crowned Black Wheatear in North Lincolnshire - the second for Britain and the first since 1982. The location eventually firmed up, and there were photos of the bird so it was an easy decision to be able to go. Obviously December on northwesterlies isn't an ideal time of year, and so there was the acknowledgement that it may not be a wild bird; especially considering birds in Germany/The Netherlands in recent years had been deemed escapes from captivity. But, with nothing else planned, then why the heck not head up despite any misgivings...

And there we were just after dawn, walking about a typically Scunthorpe-like area of Scunthorpe in a typically fringe of society way, just like the pursuit of twitching tends to dictate! No sign of the target bird first thing, but the finder was about and was lapping up the 100 or so birders and showing us all his photos from the day before. Certainly no rings, so that was a good thing. The urban environment wasn't perhaps ideal, but the snow could have forced it in and that said, I've seen the species regularly in Moroccan settlements. As people spread out more and more, it seemed as though locals had been seeing the bird for a couple of weeks, had taken photos and... the keeper, who had lost the bird, had come to try and catch it. So case closed?
I'm afraid it was. Although a bit sketchy and being 80 years old, the owner did confess that he'd lost a White-crowned Black Wheatear. A short while after the chain of conversations had been connected, the target bird did appear - on a house window sill, where it sat nodding itself to sleep rather forlornly. We left shortly afterwards, but it didn't take much longer for the bird to be recaptured and return for its rightful(?) owner.

So what have I learnt from this experience? Not much I already didn't know - all sorts of nonsense species are kept in captivity and the good old adage 'if something seems too good to be true, then it probably is'.

And so that was that. Time for a real bird, and with Dante S in tow, we headed to Covenham Reservoir and its extremely late juvenile Red-necked Phalarope. It had been 22 years since I'd last been here, a day in November 1995 when my mum drove me and Tom Lowe there on the way back from Spurn to see a Grey Phalarope and Great Northern Diver. Like the previous visit, this time was a success too: - 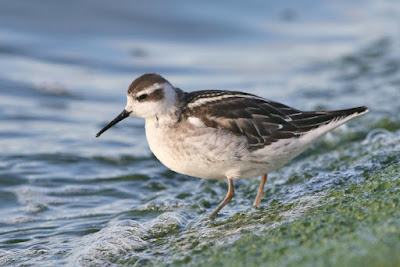 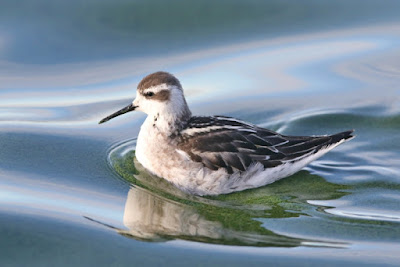 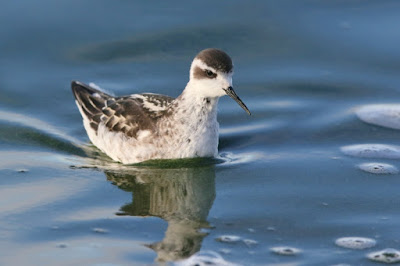 It is ridiculous to think this bird hasn't moulted into first-winter plumage!
Posted by RB at 23:18 No comments: