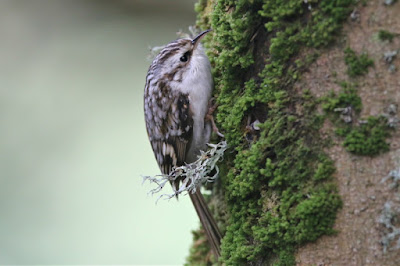 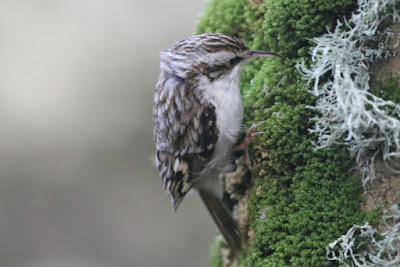 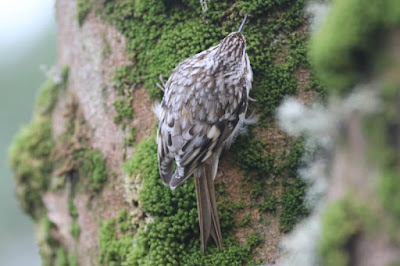 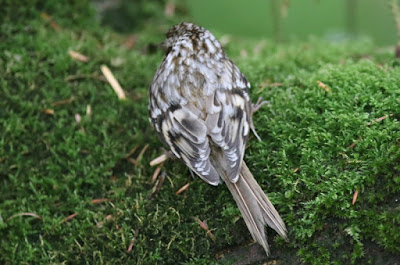 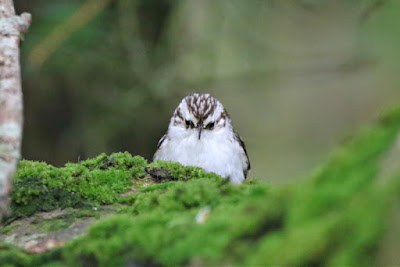 Anyway, I really enjoyed this bird and thought it was worth highlighting these northern birds once again.
Posted by RB at 22:04 2 comments:

It was one of those crisp early winter days today. Non-stop sunshine from early on right through until it got dark. Never ideal for gulls, but it turned out not to be all that bad. It started off with three BTO metal ringed Black-headed Gulls on Greenland Dock, Rotherhithe - a recent thing of mine, when times are quiet, is to get the codes of birds with just metal rings! That's five for the weekend now - three British, one Belgian and one German.

After a quick look at the beach by the Hilton hotel where a regular Norwegian Black-headed Gull was present, I headed over to the other side of the river and to Thames Barrier Park. I decided to just pay for the hour's parking initially, given how poor it has been recently and the omens didn't look good again - the park gates were locked! And so I just decided to chuck the bread out by the barrier itself and, after a couple of minutes, this lovely (unringed) 1st-winter Caspian Gull came in: - 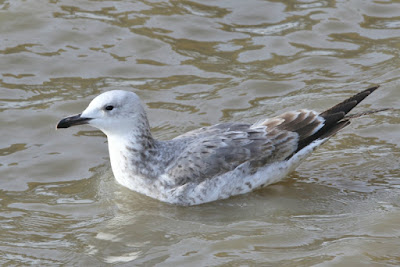 A decent looking bird, that perhaps comes from further east than the German swarm - pure speculation I know, but this bird felt good in all respects. This was the first Caspian Gull here for almost a month, and number ten for the season (July to June) for me, Jamie and Dante, and to be honest it was a bit of a surprise as there were probably no more than 50 large gulls present. Josh J has been bemoaning the lack of numbers in West London too, and I presume that London has lost its gulls due to the lack of easterlies and no cold weather so far this autumn/winter. So I'll count my lucky stars that this crisp beaut came into the loaves this morning.

Meanwhile, I had another check this afternoon of Burgess Park for the returning Med Gull - still no sign, but loads of Black-headed Gulls and a Little Grebe was nice too. It often doesn't come back until December so all hope isn't lost yet.
Posted by RB at 20:29 No comments:

But beggars can't be choosers, and in the game of twitching it is about the numbers. A marathon and not a sprint. So when you've got a precarious species, a bird that looks like that precarious species and a drive of just under four hours each way - you just have to do it. I wasn't wholly adverse to it, as London birding has been terrible recently (no Caspian Gull since before my Shetland trip!). And so I went to East Budleigh, arriving just after 9am this morning. Within a few minutes, the male Italian-type Sparrow turned up at the feeders for a minute or two, did its thing and then flew off. It looked no different to the ones I'd seen hopping about among the ruins of Pompeii last May, bar the slightly larger than usual upper mandible on this Devon bird.
And so that was that. I briefly stopped off in the little village shop, purchased some local cheese and a coffee, reminded myself once again what life is like outside London and the southeast... and then returned to London, where in the Rotherhithe gloom I had a couple of metal ringed Black-headed Gulls, one Belgian and a regular German bird.
Posted by RB at 22:28 No comments:

The furthest I ventured from home this weekend was just a few miles. Winter is here for sure, and the birding in London continues to be hard work. That's the summary. And with no easterlies, so no fresh wave of Caspian Gulls, it was a relatively quiet time. Which was a shame considering Niall K was back in London town, and a couple of young birders Samuel and Elliot joined the Thames Barrier Park late afternoon Saturday party.

So yesterday, the highlight was an adult winter Mediterranean Gull that was present at Thames Barrier Park briefly mid morning. There were, though, c.10 Yellow-legged Gulls about - evenly split between Thames Barrier Park and the O2. Other interesting bits about were a presumed adult hybrid Herring x Lesser Black-backed Gull at the O2 (that superficially resembled a Yellow-legged Gull), a 2nd-winter bird possibly emanating from Germany and then an adult and juvenile argentatus. But no Casp...
And today, again there was no Caspian Gull. But that wasn't a surprise given that Dante and I spent most of it looking at small gulls on ponds, away from the Thames. And it did have its rewards, at Wanstead in partcular, where there was a 2nd-winter Mediterranean Gull, three Norwegian colour-ringed Common Gulls (all returnees, including one at least 22 years old) and a German metal-ringed Black-headed Gull.


Thames Barrier Park was really poor, with just an adult Yellow-legged Gull. So it was back to Rotherhithe where there were actually quite a lot of large gulls, about 150 in total, which included a couple of Yellow-legged Gulls - a 1st-winter and a 2nd-winter.

Last stop of the day was Burgess Park, where the annually returning Med Gull hadn't returned - not too late yet, but one of these years it won't appear.
Posted by RB at 23:45 No comments:

My first Slovakian Caspian Gull amongst other things

I started out relatively early from Rotherhithe, in the rancid early November gloom. With a sniff of southeasterly and such a poor autumn here in the east, I thought I'd give it one final push. So headed to the Kent coast, specifically the White Cliffs NT near Dover and then walked down to Langdon Hole. It's a site I always fancy, and never really delivers for me. And it was like that today with a few hours this morning producing a Continental Coal Tit (in Langdon Hole) as the highlight, plus a Bullfinch and a load of Goldcrests. The drizzle kept any viz mig at bay, save a few Redwings that headed west. And that was that, so time to head to Dunge and the gulls for the rest of the day.

Having met up with Mick and Richard at the usual lunch spot for a well deserved bit of stodge, we headed out to the fishing boats early afternoon. There was a bit of a roost, so we started scanning where Mick picked out a suspiciously Caspian-like head in amongst the flock. A great call, and after a bit of re-positioning to get a better angle, I lifted my bins and said rather excitably 'it has got a white ring' (expletives deleted). Now for those not in the know, a white ring on a Caspian Gull is something really special! We're used to red rings (Poland), orange rings (the odd one ringed at Pitsea in the past), yellow rings (German mutants, Ukraine and Poland) and green rings (older German mutants and Poland) but a Caspian Gull with a white ring I knew was going to be a new scheme for me. And I knew that it'd either be from Serbia or Slovakia. And with a code 265:S it was a Slovakian beauty... 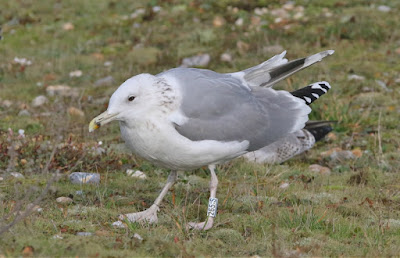 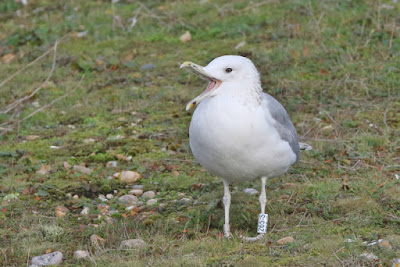 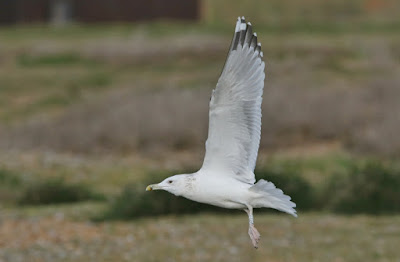 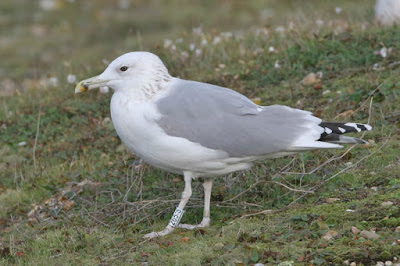 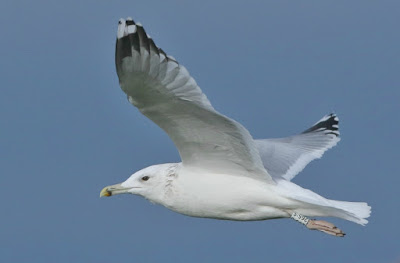 It didn't like the loaves, and resisted being fed throughout our time with it. And so we left it in peace as it roosted up between the fish hut and the fishing boats. A second-winter Yellow-legged Gull joined it, and a different second-winter Yellow-legged Gull was on the beach a bit later too. Along with this guy, a first-winter Caspian Gull: -
I might as well post this here too, as I didn't post it up during the week. But I managed to get in on the Hawfinch action on Tuesday (31st October), when three flew over school at 7.10am. It was a good morning for thrushes moving over London, and the Hawfinches headed up a small flock of Redwing heading west. Apparently that is what had also happened in Regent's Park too. So I was pretty chuffed, as you take moments like that being based in central London.
Posted by RB at 22:48 No comments: