mid-August back in London

I've been back in London now for just over a week, and bar a fair bit of time spent in school sorting bits out, I've been enjoying the gull action pretty intensely.

It all started on Monday 13th August when Josh, Dante and I headed to Rainham Marshes where on the incoming tide there were a couple of 1st-summer Caspian Gulls - the first one was German muck, but the second one at Coldharbour Point was this rather handsome chap: -
Dante and I then headed to Crossness, where at the outfall this juvenile Little Gull was parading itself if a little distant. This bird was essentially in full juvenile plumage: -
Tuesday 14th August was quiet, with very little at Crossness while Rainham too the next day was hard work, except for the expected good numbers of Yellow-legged Gulls. But all birds there are frustratingly distant, which can't be said for this juvenile Yellow-legged Gull that turned up on Greenland Dock on the evening of 15th August: -
I headed to the Bird Fair on Friday 17th August, but was in a particularly unsociable mood once I entered the place. There are so many people there who are pseudo birders, and so many of the good guys from back in the day have had to sell out to eek a living. The amount of what I call 'false friendships', founded on social media whoring and selfies, beggars belief. But I always enjoy the Art Marquee, so I bought a nice original Red-rumped Swallow painting from Stephen Message. As well, I saw two juvenile Caspian Gulls on the way there with Josh, at his Tanholt site near Peterborough. One of the birds was a German ringed individual X525, having been seen previously in Cromer, while the other was this rather beautiful tea coloured lad: -
Saturday was hard work, with a Common Sandpiper at Greenland Pier, Rotherhithe starting things off well and the six juvenile Arctic Terns that headed upriver at Rainham Marshes mid-morning weren't bad either - but the gulls were disappointing there, with no sniff of a Caspian, and so I headed to a pleasant barbecue in Epping for the rest of the day. On Sunday 19th August, I stayed nice and local with leisurely views of at least six juvenile Yellow-legged Gulls on the mud by the O2 in Greenwich: - 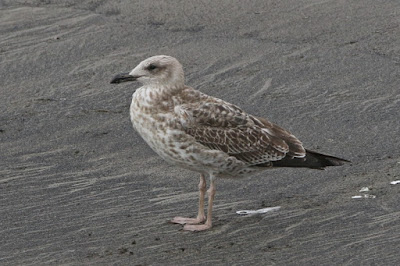 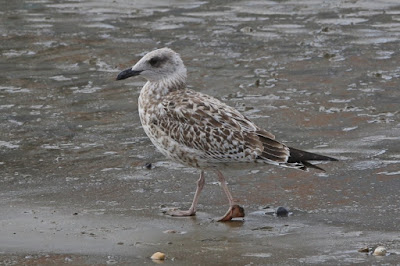 Dante joined me at the O2 on Monday 20th August, and we had a juvenile Mediterranean Gull flying upriver as I arrived, four Yellow-legged Gulls as well as this 2nd-summer Caspian Gull (which has previously been seen by Josh and Dante at Thames Barrier Park in July): - 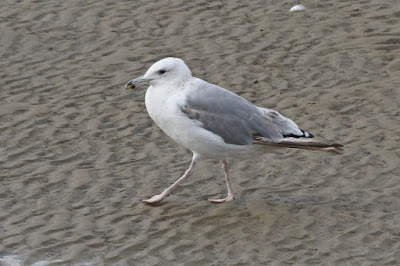 A relatively subtle looking thing, with a slightly too beady eye for my liking, so perhaps some German influence in there somewhere! But the neck streaking and the retained P10 feather showing a decent mirror both are pro-Caspian features. Two Yellow-legged Gulls at Rotherhithe that afternoon, a 2nd-summer and a near adult, were particularly showy: - 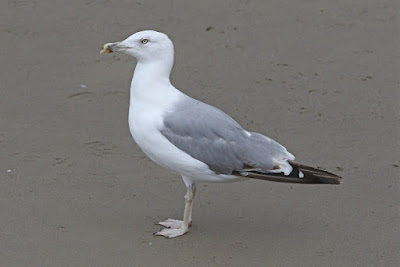 So all in all, it has been a fairly pleasant ease back into London birding. I'm ready for the autumn now and whatever that has to throw at us...