Alaska’s a massively wildlife rich place, but for the last few years there has been one place that has been the aim above any other. Remote, lying midway in the Bering Sea between Alaska and Russia, St. Paul Island was essentially the reason for my trip here. Probably best known to most for being one of the main harbours in the TV show The Deadliest Catch (and its associated King Crabs), it is also one of the real jewels when it comes to seabirds. Spring and autumn time, it functions (along with Gambell) as North America’s equivalent to Corvo where Asian mega vagrants are what the hardcore ABA listers go there for. St. Paul is essentially a rock of 22 square miles with just a couple of flights a week from Anchorage that are weather dependent, one hotel that is attached to the airport (or is the airport attached to the hotel?), meals served in the canteen of the Trident Fish Factory… you get the idea.


However, my main aim of this summer's trip to Alaska was to see Red-legged Kittiwake on St. Paul Island and that I certainly did. It is probably the most accessible place to reliably see this species, and so due to flight schedules I was able to spend four fantastic days on this rock. Though still outnumbered by Black-legged Kittiwakes quite considerably, there are good breeding populations on the cliffs and they come into the harbour at times, sitting nicely on the jetties. I saw them in several spots, often flying by among the Black-legged Kittiwakes, but also in the town harbour and cliffs at Ridge Wall and Reef Point. Proper quality birds, with that big eye allowing them to feed nocturnally (similar to Swallow-tailed Gulls!): - 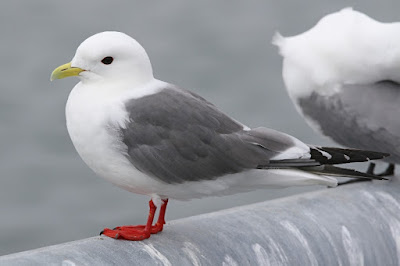 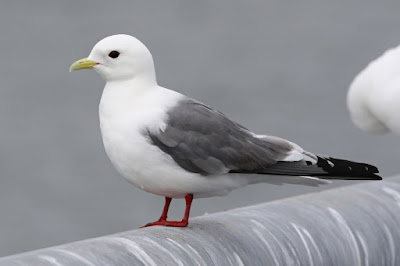 Shortly behind Red-legged Kittiwake, St Paul is a mecca for some crippling alcids. And they show exceptionally well too. Most of the cliffs are loaded mostly with Brunnich’s Guillemots and lesser numbers of Guillemot (nice to write these Anglicised having had to call them Thick-billed and Common Murres out in the field!). Plus the two clowns of the Pacific in abundance too, Horned and Tufted Puffins: - 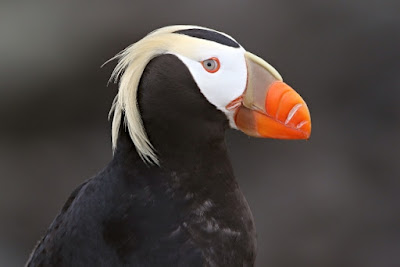 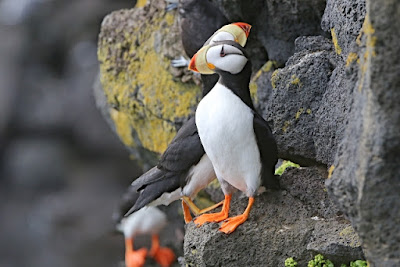 One of the reasons a lot of birders come to St. Paul though is the views of breeding auklets, where elsewhere they’re often distant lumps on the sea, here they are up close and in your face. Parakeet Auklets and the much scarcer Crested Auklets chill out on rock ledges before heading into their nests in deep rock crevices, while the gremlinesque Least Auklets seemed to prefer the boulder beaches to breed. All such good birds, and a massive thrill to see in such good numbers: - 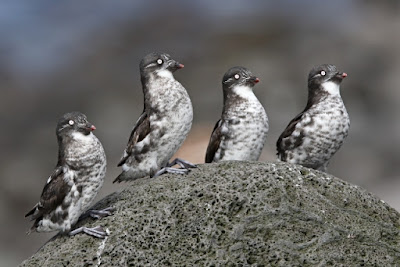 Red-faced Cormorants were the commonest breeding cormorant on the cliffs, and having only seen them at relative distance in Japan previously, the views on St. Paul of this range restricted species were rather better: - 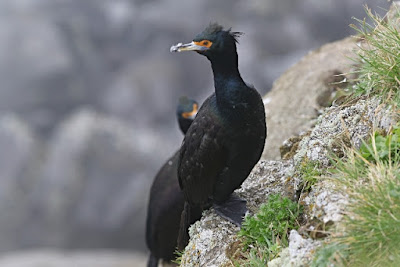 St. Paul though has other birds too, and where the four most common species are Grey-crowned Rosy Finch, Rock Sandpiper, Lapland Bunting and Snow Bunting then you know you’re in for a decent haul. Habitat wise, a lot of the island was grassland with nearly fledged Rock Sandpipers hopping about pretty regularly – so you get a bit blasé given elsewhere they’re a target bird: - 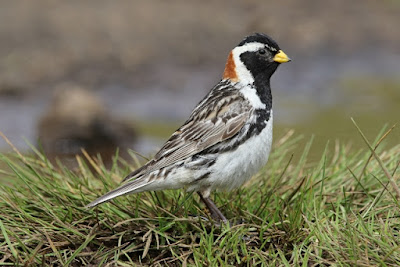 A lot of the Rock Sandpipers could be found foraging in flocks at Salt Lagoon just outside of town while walking around other lagoons such as Antone Lake and Pumphouse Lagoon provided some pretty mega views too: - 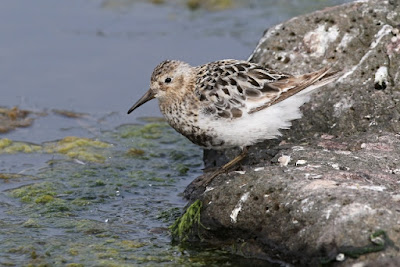 Dreamland if you’re into your Arctic waders. There were several Wandering Tattlers seen along the coast – probably about a dozen in total – while Semipalmated Plovers and Red-necked Phalaropes evidently bred on the islands: -
I also located a flock of seven Pacific Golden Plovers at High Bluffs, on the west side of the island, one afternoon while a Grey Phalarope flew in off the sea there too (as well as there being a big flock of them out to sea from Reef Point too one morning).

There were lots of Harlequin Ducks around the coast, as well as Long-tailed Ducks as well as a couple of White-winged Scoters from Northeast Point one afternoon. Across the island, I saw about 15 King Eiders – including twelve together at Northeast Point – while this one in town on Salt Lagoon was the showiest of the crew: -
I spotted a couple of Vega Gulls during the trip, a third-summer and first-summer, but both birds were a bit distant among the Glaucous-winged Gulls. An Arctic Skua ditched down on Antone Lake on my last morning, a handful of Short-tailed Shearwaters cruised by offshore while this Short-eared Owl quartered the grassland on the first evening on the island: -

Other than the birds, the island is packed full of Northern Fur Seal rookeries which meant a good number of the beaches were off limits during my trip. But they showed nice enough, and it was obvious too it was pupping season, particularly at Zapatni Bay. There were also some Harbour Seals and one afternoon while seawatching from Webster, in the northeast of the island, a couple of Fin Whales breached a few times albeit distantly.
The only land mammal that was about, and quite abundant, were the Arctic Foxes. It’s a blue morph that occurs on St. Paul, and there were quite a few family groups about during the trip, particularly in the town as well as a den near our hotel at the airport. 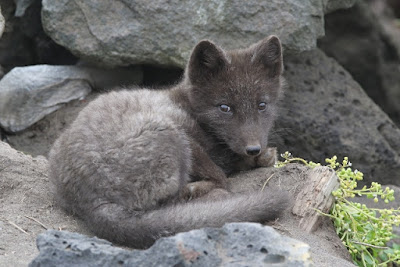 Doing St. Paul as an independent traveller is tricky, and you do have to go through St. Paul Island Tours. It’s not cheap but, as with everything in life, you get what you pay for. I lucked out with a decent group of five of us (two Belgians and two Americans), all of us happy to just keep on going and lap up as much as possible on the island during our four days and three nights. Much appreciation too to the two resident guides there, Claudia and Sulli, who were chilled out, accommodating and showed us the place nicely. It’ll be a trip I remember for as long as I live – such a decent place, and full of birds and remoteness. Thoroughly recommend it above most of the places I’ve ever visited.