I spent this afternoon chucking out bread and feeding the London gulls. My regular pastime. If there was actually some feeling that there was other stuff to find locally I would diversity, but what with all these westerlies, I was back to my default position. Rotherhithe, Thamesmead and Greenwich were all quiet over the high tide period and so I headed north over the river to Thames Barrier Park with the first sniff of foreshore exposed. And sitting there when I arrived was this ringed adult Yellow-legged Gull: -
I quickly fired off an email to Paul Roper, knowing it was a Thames ringed bird, and within minutes he came back with an enthuasiastic reply. It had been ringed as a juvenile at Rainham tip, London on 27th August 2011 (photos of it then here) before turning at Nurlu, Somme, northeastern France on 20th January 2012 and then finally being seen the following winter, on 29th January 2013, in southeast France at Bourg-les-Valence, Drome (photo here).

So where has it been since? Who knows but presumably it is now breeding in eastern France, Switzerland or Germany, where there are a lot of lakes and few birders. And why do I speculate this orgin? From the limited evidence I have from this bird's previous movements and three ringing recoveries of Yellow-legged Gulls that I've had in London/Essex - two from the big Swiss lakes and one from southern Germany.

I had a further three juvenile Yellow-legged Gulls at Thames Barrier Park this afternoon with Dante and Jamie P, while there were three more at the O2 this evening - felt a bit cheated with this paltry total given that we'd waded through the hordes of Bros fans on their way to listen to a couple of peroxide blonds from yesteryear sing 'When Will I Be Famous'. 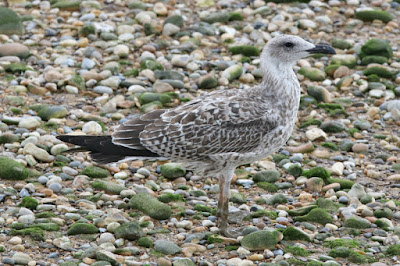 Meanwhile back in London...

I've been away from London since my last post. Had a lovely time with Karen in Kenya and Zanzibar seeing all sorts of exotica. From big cats to whales, monkeys to ostriches, bustards to huge numbers of wildebeest. But there was one thing that was missing... not a single gull was seen! So since Sunday, I have had time to fix that with a few local sojourns.

On Sunday, I managed to get Josh J out of his posh west London quarter and over to the south and east with Dante and I. We started at the O2 where there were two lovely juvenile Mediterranean Gulls, the first of the season for me here in London and both metal ringed! With a bit of camera clicking at different angles, we were able to establish that both birds were from The Netherlands with ring codes 3740890 and 3742464, so given that they're only 1,574 digits out I'm assuming they'll be from the same colony. Let's wait and see! 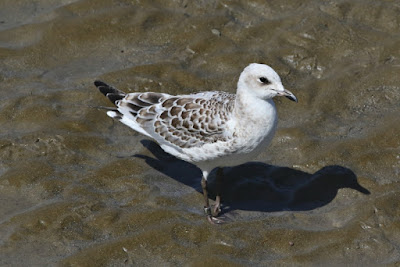 And then onto today, where I had another juvenile Mediterranean Gull on the mud by the O2 in Greenwich today. This one was unringed, and given that I only saw one juvenile there in August last year, it seems that the increasing breeding numbers just outside of London are directly translating into more here. Though still waiting on one in Rotherhithe for the year. 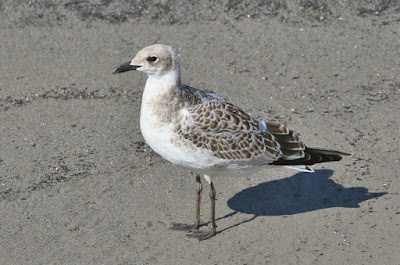 Since I left in late July, for some reason, there has been a reduction in Yellow-legged Gull numbers. I've had just the one in Rotherhithe since I returned - a second-summer yesterday - while numbers at the O2 and Thames Barrier Park have been in the low single figures with mainly juveniles still hanging about. And no Caspian Gulls either, so hopefully there'll be a few turn up with the next load of easterlies.
Posted by RB at 21:46 No comments: