Back down to earth with a bump today, where local birding around Rotherhithe was diabolical. They've trashed the lake at Burgess Park, and are draining it currently. Though still plenty of gulls around, but I couldn't detect the returning Med Gull just yet. Apart from that, just a couple of Egyptian Geese (regular birds) and 3 Shoveler in Southwark Park.

Having got a big fat Birdforum ban for private comments about the owner of the site, I've turned my attention to Surfbirds and there's a really sensible thread on Dunlin. I've had some correspondence with Niall Keogh about potential hudsonia race birds at Tacumshin this autumn, and in the past birders with an interest in the Azores have pondered on a few birds they've seen out there in the mid-Atlantic.

Which brings me to this bird that was one of two, spotted by Lee Gregory and I in November 2008 at Ribeira Grande, Sao Miguel. 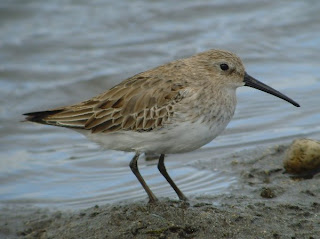 The bill on this individual is massive, with comparatively long-legs, pale toned and just didn't feel like schinzii and arctica birds. Perhaps this bird has more extensive flank streaking but I am not sure whether it could be claimed as a hudsonia candidate (the flank streaking in my eyes is not as extensive or extends far enough back for hudsonia).

The key features for hudsonia seem to be a line of dark dots that extend onto the lower flanks, extensively dark lores, a long bill and a solid grey pectoral band (per Stoddart, A. 2007. An apparent Hudsonian Dunlin on the Isles of Scilly. Birding World 20: 464-466).