It has been a manic few days, and my head is frazzled. Largely due to research into skuas, formerly of the catharacta variety. Firstly, it was (and still is) the task of trying to work out how many individuals were involved through photos taken and then secondly, the major task of trying to age these birds.

To put it simply, last week on Graciosa during the pelagic trips, at least three (possibly more?) of these bully boys were seen hassling the local gull and tern populations. And what I've worked out so far is: -
- juveniles (2nd calendar years) and adults are potentially do-able on moult (at least assignable to 'southern skua sp.')
- 3rd calendar year birds are not understood fully in terms of moult strategy, so are not do-able

Think about the decent nick of Bonxies on Shetland right at this moment in time - they are breeding birds in decent primary/secondary plumage. Adult 'southern skuas' breed later (in our autumn/early winter) so are now pretty screwed and in active wing moult.

A young Bonxie born in 2010 will have an earlier birthday than its 'southern skua' counterpart, probably by 4-5 months. So our northern hemisphere babies will be in a stage of moult, perhaps having even replaced all of their juvenile primaries and secondaries. Our fresh-faced southern boys/girls will be much fresher, and should still have retained juvenile feathers or at worst, be just started to moult. So here are a couple of birds to get us started. 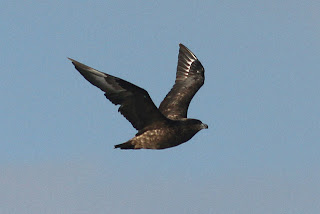 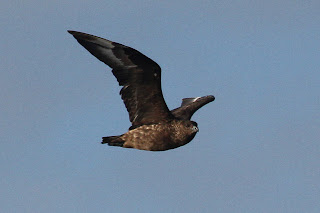 This bird is presumably a juvenile that has gone through one wing moult cycle. P10 is a retained (presumably first generation?) feather while P1-P9 are newly moulted. Being so advanced in its moult cycle presumably means this is a Great Skua, as post-juvenile flight feather moult starts in March-April (as the body moult is completed) and is completed in June-late August, taking 150-180 days’. This advanced moult sequence, presuming it is indeed a juvenile, would rule out the southern hemisphere Skuas as they would not be as advanced as this bird (they would have been born later). The rather plain, concolourous upperwing-coverts also suggest a 2nd calendar year bird.
Bird 2 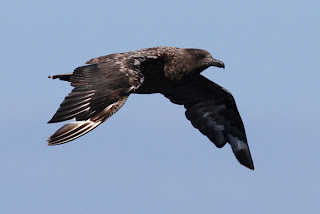 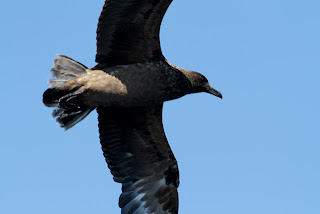 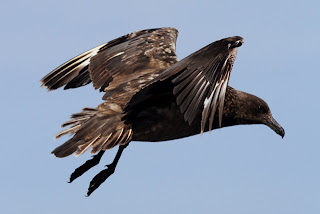 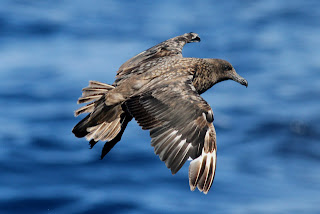 Presumably not a 2nd calendar year bird based on the state of plumage – two generations of ‘blotching’ in the upperwing-coverts, scapulars and mantle heavily ‘blotched’ – and bill all dark, as well as heckling on the nape (per http://www.surfbirds.com/mb/Features/skua-identification.html). In active wing moult – P8-10 retained (P6-P7) re-growing. The bird did not appear capped in appearance, once again suggesting a bird older than its 2nd calendar year – post juvenile moult strategies are not fully understood in both southern and northern Skuas, so here perhaps here lies the issue? If this bird is an adult, Falkland and lonnbergi Brown Skuas commence moult in February to April, completing in June-August per Malling Olsen & Larsson 1997. Also note the colouration of the two newly moulted central tail feathers.
Here's a similar take on this tricky situation http://peteralfreybirdingnotebook.blogspot.com/2011/06/large-skuas-off-graciosa.html by Peter Alfrey and some more shots at by Gareth Knass athttp://www.flickr.com/photos/34986481@N07/sets/72157626907155648/.
Posted by RB at 20:06