After those January storms that produced a load of kumlieni, perceived kumlieni, pale-winged kumlieni and whatever else people were trying to sniff out of the massive numbers of Iceland Gulls that reached our shores, it seems as though the show is now almost over. Just the odd bird continues to linger, including the second-winter I saw a few days ago in Dover that continues to cause a bit of controversy. Its Herring Gull-like structure has echoed calls from some of it being an aberrant individual of this species, something I disagree with.
Perhaps this is actually the real deal? The fact that it doesn't necessarily feel like a nominate glaucoides isn't all bad, as those in the know rave on about the structural differences - with kumlieni being larger and longer-billed etc. All sniffs of turd for a field birder on a lone individual where sexual dimorphism is rife in larids, but who am I to argue. 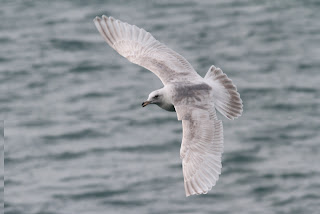 Thing is though - what's really noticeable on this bird is its retained greyish/brown tail band. I imagine this bird last winter would have been a bit of a beast, with none of that squinting you need sometimes to see the apparent pigmentation on juvenile kumlieni. This bird will have been the real deal. However, the colour shade of the mantle feathering coming through on this bird is extremely dark - Herring Gull dark - but that's no issue. Have a look at this interesting article on adults (actually written by somebody who lives with kumlieni, instead of some pseudo-expert talking about what they see on the computer screen) and scroll down to mantle shade and you'll see what I'm on about. Particularly see how presumed glaucoides can so easily be picked out just on mantle shade from kumlieni.

For some reason there have been a lot of second-winter Iceland Gulls within this influx, and with this has come a lot of 2nd-winter Kumlien's Gull claims. And I got amongst this in Ireland a few weeks ago in true fashion. I'd been looking forward to seeing a 2nd-winter kumlieni up close and personal by the River Shannon at Limerick and was confronted by this bird, that in fairness put on a good show coming to our bread and an Afro-Caribbean woman's more exotic concoction of 'stuff'... 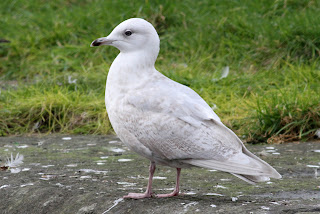 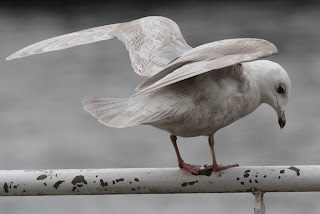 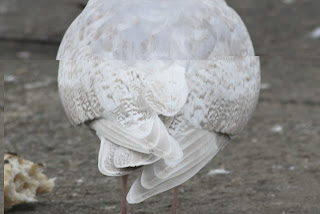 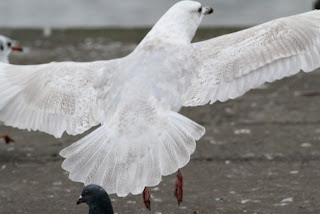 But what's important to mention with this bird is that it's not a Kumlien's Gull - it's one of those brown-washed Iceland Gulls and a pretty average one at that. The primaries are relatively concolourous, with not a hint of any ghost mirroring that you'd be looking for on a solid kumlieni. Additionally, there's no contrast with the outer and inner primaries with the wash extending throughout and though it's got a slightly darker eye than some 2nd-winter glaucoides, the tail band is pretty naff.
Right then, before I sign off for the night, it'd be rude not to whack out a couple of shots of 2nd-winter Iceland Gulls from my Irish trip a couple of weeks ago. They're pretty smart, albeit rather white and non-descript birds in many ways but you get a fair bit of variation in bare part colouration and moult!
Hasta luego folks. Always discovering :)﻿
Posted by RB at 23:13